I’m conducting an experiment: Is it possible to walk into a record store with $10 and walk out happy? I explained the concept here.

After leaving Squeezebox in Evanston, I headed north for a mile and a half to visit Vintage Vinyl (925 Davis). Unlike Squeezebox (and plenty other record stores), there are no true “bargain bins” to be found at Vintage Vinyl. The first floor is overflowing with highly collectible, rare, well-kept, “holy shit” albums.

But “holy shit” records are rarely cheap, and I had a $10 mission to accomplish. The basement of Vintage Vinyl is where they keep their budget records … and their definition of “budget” is $10 per record. For the purpose of my challenge, one record was all I could afford.

I saw a lot of good stuff in the $10 bin, mostly classic rock records (Bob Dylan, the Eagles, Bad Company, Bob Seger) in excellent shape. After digging for a few minutes, I hit gold… or at least my version of gold: Eleventh Dream Day “Borscht.” 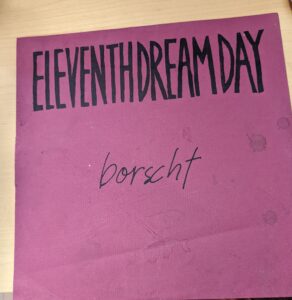 “Borscht” (1990) was a promo-only, live-and-unreleased, record that followed Eleventh Dream Day’s Atlantic Records debut, “Beet.” I’d never seen a copy before, so this was an exciting find for me.

As for Eleventh Dream Day, where to start? They’re simply one of the best Chicago bands of the past 35 years, and the live side of “Borscht” proves it. Recorded at Lounge Ax on 1/6/90, the band absolutely rips through tracks like “Testify” and “Bagdad’s Last Ride.”

To be honest, this trip was also kind of a cheat, in that I ended up spending more than $10. I also walked out with $10 copies of Cheap Trick “At Budokan,” Little Feat “Dixie Chicken” and Aerosmith “Draw the Line.” Checkmate honey, beat you at your own damn game.