Record collecting isn’t a cheap habit to feed. I’m well aware that I’ve spent a fair amount of money on vinyl over the past few years.

That ongoing expense got me thinking: is it possible to walk into a record store with only $10 and walk out happy? New pressings start in the $20 range and used records seem to be priced more aggressively than they ever have. The ceiling keeps moving up.

I decided to turn my rhetorical question into an ongoing experiment: With only a ten-spot and a bit of optimism, my mission is to go into record stores and find records I actually want to own and play. Furthermore, to hit that goal, I need to resist the temptation of buying typical “bargain bin” records (e.g. Moody Blues, Jethro Tull, Utopia and the Pablo Cruise album with “Love Will Find a Way”).

My first experiment was conducted today at Squeezebox in Evanston (743 Main St.). I’d previously had good luck finding cool records there (e.g. “Life’s Too Good” by Sugarcubes; I don’t think I’d seen it on a shelf since it was a new release in the late 80s).

Squeezebox has two “budget bin” areas. In the main record store area, budget records are 3-for-10, perfect for the purpose of my experiment. The next room over has records priced at 3-for-5, but going through those bins tends to feel like a quixotic quest.

Sticking with the 3-for-10 records for this visit, I had no problem finding a handful of solid candidates (and yes, lots of Moody Blues and Tull). I mean, you can’t even find Zebra on streaming services… 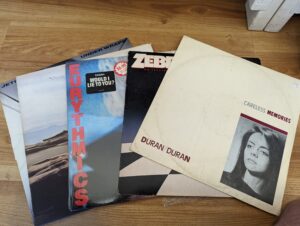 In the end, I landed on this trio: 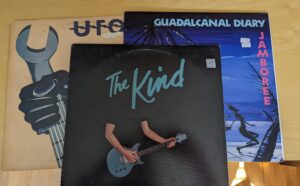 UFO “Mechanix” – Not necessarily a fan or critic’s favorite upon its release, but the album’s aged better than expected. The cover of Eddie Cochran’s “Somethin’ Else” is a little cringey.

The Kind (s/t) – Chicago power-pop from the early 80s. I still have affection for “Loved By You.”

Guadalcanal Diary “Jamboree” – Interestingly, the only Guadalcanal Diary album that I didn’t already have. Their jangly songwriting still holds up, and you can’t go wrong with “Cattle Prod,” “Fear of God,” and “Pray for Rain.”

While none of these albums are classics, or even records that I’ll play with regularity, I feel like I got my $10 worth.