I’m conducting an experiment: Is it possible to walk into a record store with $10 and walk out happy? I explained the concept here.

When it comes to record shopping, Half Price Books is always a roll of the dice. I used to have much better luck there a few years ago, but I’ve left there empty-handed more often than not in recent months.

When I visited today, the bins were utter chaos. Alphabetization was creatively applied: “She’s the Boss” by Mick Jagger was filed under “S.” “Re-ac-tor” by Neil Young and Crazy Horse was filed under “R.” “Outside Inside” by the Tubes was in the “O” section. Barry Manilow was in the “B” section. Foo Fighters and Frank Zappa were in the reggae section. It was like a five-year-old was asked to organize the bins.

That made digging for treasure all the more frustrating, if not enraging. In the end, I walked out with:

The Alarm “Strength” ($5.99) – The Alarm’s second album is my favorite from their catalog, mostly because of the title track. I’m sure I could probably find this in another store’s dollar bin, but I wanted to walk out with something.

The Boomtown Rats “A Tonic for the Troops” ($3.99) – “Rat Trap?” “Like Clockwork?” What a great album! The version I bought was a promo copy and in immaculate condition. 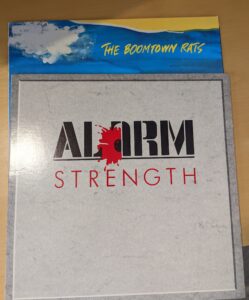