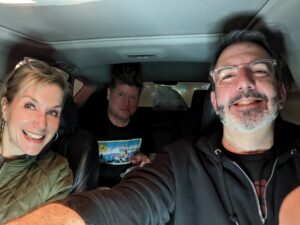 Liar’s Club owner Herb Rosen and Katie Augustyn of KT’s Kids joined me for a preview of the event while eating steak sandwiches from Booby’s in Niles.

Local H’s Scott Lucas also checks in over the phone… Scott’s part of the Nefarious Fat Cats, the punk rock supergroup that will be taking the stage at Liar’s Club on Saturday!

__
Looking for a holiday gift or something cool to read on a road trip this season?

Join record store owner Darby on her trip back to 1990s Chicago as she jumps on the Grey Line to time travel back to her carefree twenties, soaking up all the pop culture and rock n roll nostalgia you could ever imagine.

Get a signed copy at 90daysinthe90s.com