Cirque du Soleil “VOLTA” is, on the surface, a circus; a big top amalgam of a number of circus-type acts and feats. But it seems reductive to leave the description there.

I was given deep, “in the trenches” access to “VOLTA” earlier this week, which theoretically made it easier for me to summarize the show. Instead, the more I thought about it, the harder it became to explain. As I walked around the compound and backstage areas, the word “everything” kept bouncing in my head. The production, from what happens behind the scenes to what you see on stage, includes everything:

When Cirque du Soleil lands in a city, they create their own city inside it. The various tents and trailers that populate the parking lot are a sustaining infrastructure, including costume design, bike repair, gear repair, showers and bathrooms, a cafeteria with world-class (and healthy) food, and practice/workout spaces. Speaking of which, you wouldn’t be wrong to have tired legs just from watching this pre-show warmup from the rope skippers:

And here’s the ceiling of that same practice space: 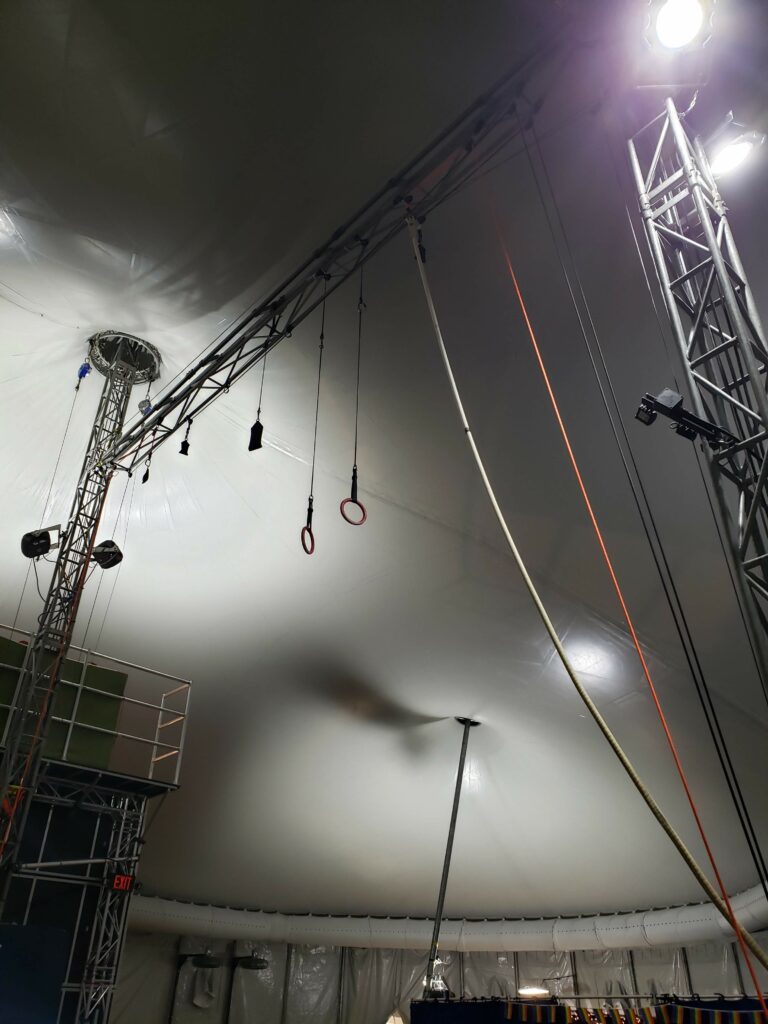 My plan for the night was to embed with the band during the show. Before the show, I sat down with band leader/drummer Ben Todd to talk about his career and his Cirque observations: 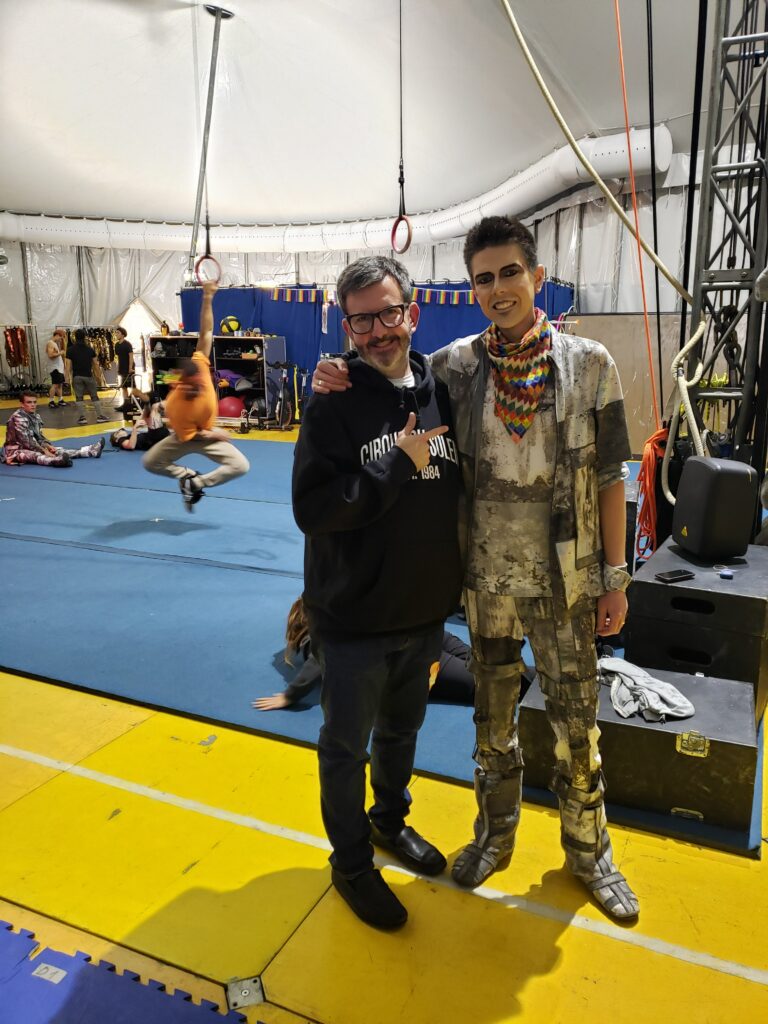 Minutes before showtime, Ben and Will Lawrence spirited me away into one of the two “band pits.” The pits are essentially musician bunkers that are beneath, but still visible, on the stage.

Here’s the view from the band pit, Will Lawrence included. 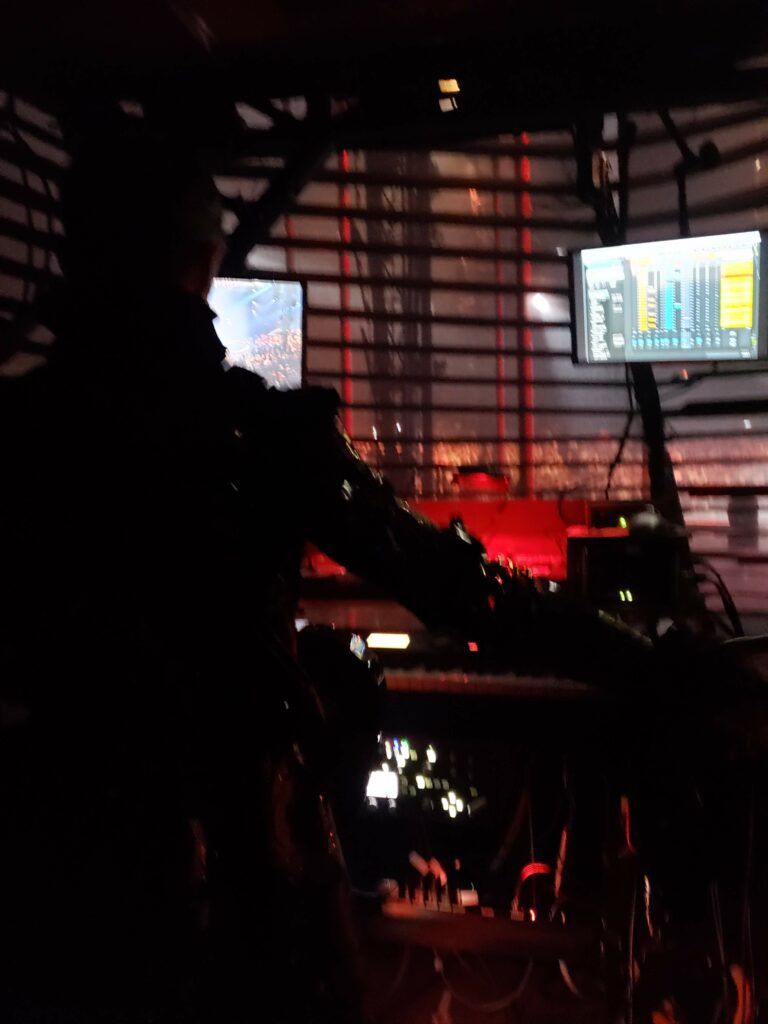 I was perched in the corner of Will’s space, watching him transition from guitar-to-keyboard-to-different-guitar-to-onstage-performer with a stressless grace (and a fairly constant smile throughout).

To my immediate right was Ben’s drum room, where he balanced the performance aspect of the gig with providing in-the-moment direction to the band as the performance shifted, changed and twisted in some unexpected ways. How close was I to the drums, you ask? THIS CLOSE.

I was wired into the stage directions and Ben’s directions via IFB device and headphones, so I could hear everything going on behind the scenes. For those of us who can’t walk and chew gum at the same time, hearing Ben direct the band while playing drums and monitoring the show comes off as a multitasking achievement.

In my interview with Ben (which you can listen to above), we talked about how unforeseen circumstances can lead to him making decisions and adjustments on the fly, making each performance unique. It must have been foreshadowing, because that’s exactly what happened on the night I was there.

Because this has been the worst weather summer ever in Chicago (right?), what started as a beautiful night went south for about an hour as storms rolled through. Lightning was detected near the downtown area, and “VOLTA” had to be paused twice for safety precautions. I heard the notices come through my IFB, something along the lines of, “we’re stopping the show” (which sounded super ominous without the context of what was happening outside). Ben directed the band to kill the music as stage activity was brought to a halt for 15 minutes each time.

To oversimplify show business moments like that, shit happens. And when they happen, the incident is never as important as the recovery from it. And the recovery was seamless.

The two unplanned breaks meant songs needed to be sacrificed as the show was realigned. Will and Ben showed no perceptible shift in attitude or energy as they stole the momentum back from the weather-dictated down times.

As multi-continental as the “VOLTA” cast is, it’s cool to know that the Chicago area has representation in “VOLTA.” Kevin Beverly is a hoop-diver and a back-up for lead character Waz. We snuck in a quick picture as a sign of local solidarity: 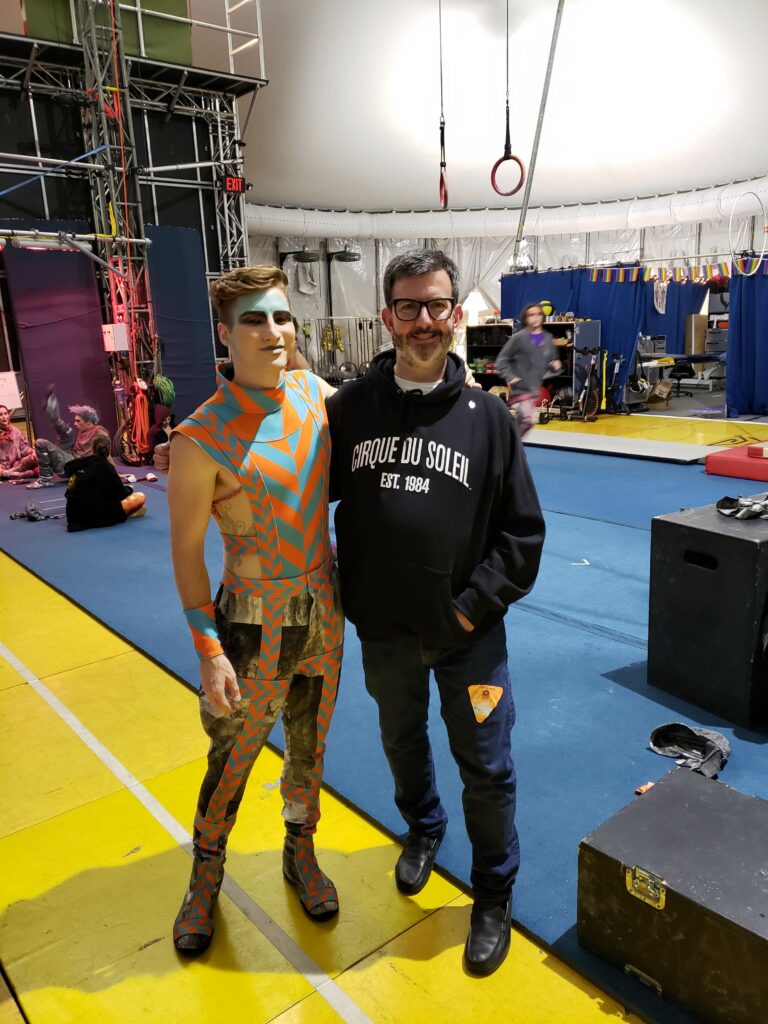 Car Con Carne is presented by The Autobarn Mazda of Evanston.