(Film viewed as part of the Chicago International Film Festival)

‘Shorts 3: After Dark — Things Aren’t What They Seem’ collects eight horror shorts from U.S., U.K. and Mexico filmmakers. Of those eight, half are worth recommending. Of those, two are absolute standouts.

“Guts” (U.S.) is an over the top, practical effects heavy, gore bonanza that’s essentially an NC-17 version of the classic SNL skit, “Massive Headwound Harry.” “The Dinner After” is an intense, unsettling and unexpected family portrait. The less you know about it, the better.

Also in the top tier: “Swept Under,” a heavy-handed exploration into the dark past of Cambodia that was easily the most inventive concept of the bunch. 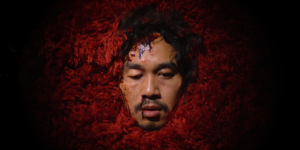